KLARA facilitates greater diversity of versions in production at Audi 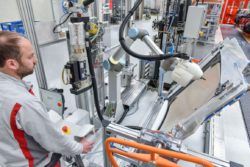 New robot colleague in the assembly of Audi A4/A5 models: People and robot now work there side by side without a protective fence. With this human-robot cooperation (HRC), the smart factory comes closer to reality at the Audi plant in Ingolstadt. “Adhesive application with robot assistance,” abbreviated from the German as KLARA, provides support with the installation of roofs made of carbon fiber reinforced polymer (CFRP) in the new Audi RS 5 Coupe. So for the first time, Audi is using an HRC light robot in its main plant for applying adhesive in final assembly. Similar robots are already integrated into production in the body shops in Ingolstadt and Brussels as well as in engine assembly in Győr.

As the first step, an employee places the carbon‑fiber reinforced polymer roof on a rotary table and tilts it. The application of adhesive is triggered by pressing and holding a button. An illuminated ring indicates when KLARA has precisely applied adhesive over a length of more than five meters. The robot then signals that the roof is ready for installation. The employee takes the roof with the aid of a handling device and installs it in the car. The CFRP roof is optional equipment in the new Audi RS 5 Coupe and is significantly larger than comparable roof systems. A person would therefore not be able to apply the adhesive as reliably and accurately as KLARA.

Unlike conventional robots, KLARA does not require a protective fence, which means that the working spaces of human and machine blend into one. This saves considerable space at the assembly line and allows HRC to be integrated into the production line. With human-robot cooperation like this, employee safety has top priority at Audi. The employee is in control, initiates the application of adhesive and can halt the process at any time. Sensors in the robot arm recognize when a human is touched and automatically stop any movement in the case of danger. KLARA also indicates any danger with the illuminated ring: It lights up red if there is any disturbance.

All equipment components were preassembled on a base plate. This allowed KLARA to be installed and put into operation within a short time. Integration took place without any interference in the existing assembly line. An alternative solution for applying adhesive to the new roofs would only have been possible with far greater effort and expense.