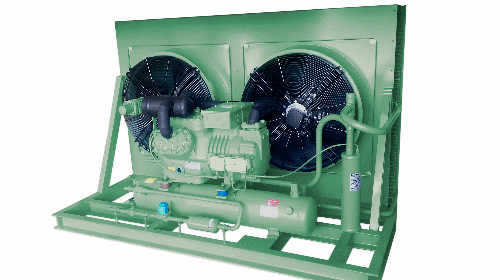 Compressor specialist BITZER has developed a new condensing unit for high ambient temperatures and greater cooling capacity. Now available, the LH265E is energy-efficient, extremely robust and ideal for the low temperature application in countries with a hot climate.

Particularly in warmer regions such as Southern Europe, Asia and the Middle East, uninterrupted cooling chains are extremely important. But the low temperature application, such as food refrigeration, poses a major challenge there. For this reason, BITZER has expanded its well-known series of air-cooled condensing units to include another construction size: the LH265E. In addition to Asia and the Middle East, the device will also be launched onto the market in Europe.

"The LH265E was designed specifically for the low temperature application in demanding conditions," says Dieter Hildebrandt, BITZER Manager World Condensing Unit. "This has allowed us to meet the demand for reliable condensing units in extremely warm countries as well as exploit growth opportunities in these regions." Depending on the refrigerant used, the condensing unit can achieve a capacity of more than 40 kW in the low temperature application. "Even in extremely high outside temperatures, the condenser guarantees reliable operations and maintains the cold store temperature," says Hildebrandt. A robust weather protective housing also makes the device very corrosion-resistant. If required, the condenser can also be equipped with fins coated in plastic.

As it does for all other models in the series, BITZER also offers the corresponding accessories that increase operating reliability for the new condensing unit. Users have the option to equip the LH265E with an accessories package comprising a pressure limiter, oil separator with check valve, and a liquid line with filter drier, sight glass and solenoid valve. The condensing unit can also simply be retrofitted with the corresponding accessories, just like the compressor.

With its impressive capacity, the LH265E is the top product in the new LHE series, which BITZER launched at the end of last year. The condensing units fulfill the efficiency requirements of the current EU Ecodesign Directive and offer much better air cooling than their predecessors. To increase efficiency, BITZER installed the fans in a revised full bell mouth that optimally guides the air stream and thus considerably reduces noise generation. Optional EC fans ensure maximum energy efficiency.