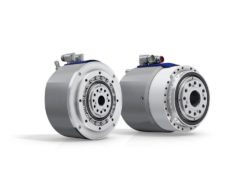 Scientific proof has now been established: Galaxie is a new, independent gearbox type with kinematics that are superior on principle. The logarithmic spiral was introduced by WITTENSTEIN with Galaxie as a new mathematical function in gear unit design. The resulting operating principle is unique and makes Galaxie superior to other, established principles in all key technical disciplines – in many cases several times over.

Galaxie is “superior on principle” – this new gearbox generation provides exceptional freedom from backlash, synchronous running, stiffness, torque density and overload protection without any of these features having to “be played off” against each other. Experts are therefore predicting that Galaxie is on the verge of exponential market penetration.

Scientific proof at the International Conference on Gears 2017

The “International Conference on Gears” was hosted by the Institute of Machine Elements / Gear Research Centre (FZG) at TU Munich in September 2017. Also on the agenda at the world’s most important academic conference for gear and transmission development, with more than 700 participants, were two presentations – reviewed and approved by professors – which demonstrated Galaxie’s status as a new, independent gearbox type by scientific abstraction. The underlying scientific reasoning was that Galaxie introduced the mathematical function known as the logarithmic spiral as a fundamentally new principle in gear unit design. The toothing takes the form of an input polygon, around which the individual teeth are grouped, leading to full-surface contact and mathematically precise synchronous running. In the meantime, both the theoretical functionality of Galaxie and its technical performance features and benefits have become generally accepted in the scientific community. 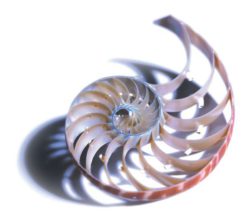 Modelled on nature: the logarithmic spiral is a new concept in gear unit design alongside involute and cycloidal. © 2018 WITTENSTEIN SE

It is only logical that Galaxie’s official recognition as an independent gearbox type should be reflected by its inclusion in publications and standard reference works on drive technology and machine tools. In its book “50 Jahre FVA: sharing, drives, innovation” (50 years of the FVA: Sharing, drives, innovation), for instance, the German Research Association for Power Transmission (FVA) mentions the WITTENSTEIN Galaxie in the same breath as a long list of outstanding inventions of the modern era, on a par with the pioneering feats of Leonardo da Vinci, August Otto, Friedrich Fischer and Rudolf Diesel. Galaxie will soon also be featured in academic textbooks – like the ninth edition of the standard reference work “Werkzeugmaschinen Fertigungssysteme 3: Mechatronische Systeme, Steuerungstechnik und Automatisierung” (Machine tools and manufacturing systems 3: Mechatronic systems, controls and automation), edited by Professors Christian Brecher and Manfred Weck of the Department of Machine Tools at RWTH Aachen University. A separate chapter dedicated to the Galaxie gearbox will describe the design, operating principle and key benefits of this new generation.

The inherent superiority of the Galaxie principle is scientifically proven. Each of the teeth involved in torque conversion is an independent and dynamic entity: supported by a needle roller bearing and grouped around a non-circular input polygon, they are radially guided along the teeth of a ring gear. This principle has the advantage that almost all of the teeth now engage simultaneously in an adaptive mesh – compared to only a few with traditional gear types featuring a rigid gear wheel. Furthermore, for the first time ever, the flanks of the individual teeth and the ring gear are designed as a logarithmic spiral, so that in contrast to classic gearboxes with linear contact, power is transmitted by surface contact with a high contact area ratio. A hydrodynamic lubrication film builds up during this surface contact, with the result that mechanical wear and abrasion are reduced to a minimum. Once the torsional or zero backlash has been set, therefore, it remains absolutely constant throughout the lifetime of the equipment. All of this adds up to a novel design principle, with the result that Galaxie is clearly superior to established planetary, cycloidal, eccentric and standard strain wave gearboxes in all key technical disciplines compared to the market standard.

Galaxie is increasingly causing existing design strategies to be overturned and rebuilt – and is all set to trigger disruptive innovations in high performance engineering.