Additive manufacturing for cars: From prototyping to serial components 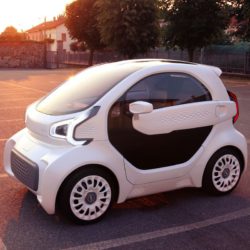 The "LSEV" shall be one of the first mass produced 3D printed cars. © LSEV

More and more car manufacturers are using a giant 3D printer in vehicle development instead of a life-size block of clay. Instead of manually joining several filigree cast parts together, serial components are now increasingly being produced using additives. And even prototypes of a completely printed car have already been presented to the public. The question is now: Quo vadis, 3D printing?

The so-called stereolithography was invented as early as 1983: It was discovered that certain types of polymers reacted to light rays and then solidified. This is the foundation for today's SLA technology, which is used to manufacture smaller components with high precision - for example, 1-to-1 prototypes for interiors, headlights or mechanical components. It took a good 20 years, however, until technology found its way into the industry. Not only were normal production methods such as using clay still cheaper, they were also faster and therefore more efficient. With the further development of stereolithography, the first economically affordable printers came onto the market around 2005, which were then slowly but surely adapted by the automotive industry.

SLA technology is indeed more expensive than FDM technology, which is based on melting solid plastic filament and subsequent application. The lithography process, however, is more accurate, requires less maintenance and is even suitable for incorporating printed parts into serial models. The parts, which are printed with this technique, are often as stable as their normally cast competitors.

Irrespective of which process is used, printing has reduced development costs enormously. The term rapid prototyping has established itself: Due to the fact that new designs were produced in a few hours instead of several weeks, new iterations could be reprinted much faster. The design process in the automotive industry has thus been significantly changed, even though many manufacturers still do not talk publicly about their prototyping process.

Fast adaptation in all areas 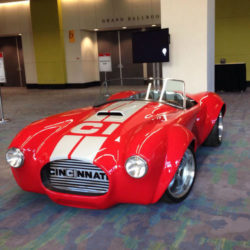 Plastics instead of clay: This car was printed in life size and is in no way inferior to the models made of clay. Source: Cincinnati

Even Formula 1 now relies on printers to produce the smallest of series. McLaren produced wings, air intakes and holding clamps within a very short time for one of the F1 cars. The parts would otherwise have had to be made in expensive moulds. Printing not only saved the racing team time, but also saved weight thanks to a strong inner structure. Through the use of nylon, which is reinforced with carbon fibres, the individual parts are as stable as "normally" produced pieces.

The largest 3D printers are capable of printing cars in their entirety: With an installation space of 6x2.20x1.80 meters, BAAM ("Big Area Additive Manufacturing") 806 is one of the few commercially available printers that can produce such large objects in one piece. This eliminates the tedious manual assembly of numerous printed parts.

Volvo lorries have been using 3D-printed components for quite some time now. Clamps, mounting devices and brackets are just a few examples. Although these are not structurally important components, Volvo's manufacturing costs have fallen enormously, switching from traditional metal to ABS plastics. The additive manufactured components cost only 1€/cm³, the metal competition is 100€/cm³. Furthermore, the production time was reduced by more than 90%.

3D printing and industry 4.0 - these are the buzzwords that currently determine the economy. While additive manufacturing in the plastics sector has already produced the first affordable printers for private households, technology in the metal sector is and remains in the hands of innovative industrial companies.

The start-up Local Motors went one step further: As early as 2014, the young company presented a car with a chassis that came entirely from the 3D printer. The model was completely printed in only 44 hours and was also suitable for driving. The study did not offer the comfort and style of a "real" car. Nevertheless, the project showed what 3D printing is capable of and how it has the ability to transform the industry. Currently, Local Motors is developing an autonomous minibus that also relies on many printed parts. 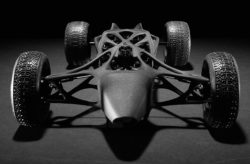 The Cirin is only a small model. But bigger printers could soon print such cars in their original size. Source: Max Greenberg, Sameer Yeleswarapu, Ian Cullimore

In addition to the widely used plastic processing, there are now also printers that can print metal in any imaginable form: The so-called laser-sinter printers selectively heat a metal powder so strongly that it bonds to form a solid component. More powder is applied layer by layer, which in turn is melted. With this technology only very small components have been able to be produced so far.

An experimental project from the Netherlands shows what things could look like in the future: In Amsterdam, with the help of two robot arms, a walkable metal bridge  was printed. The industrial robots also use the sintering technology; however, they do without the powder bed and can print more or less into the air. In principle, future cars can also be equipped with a printed chassis: New computer-generated shapes allow for greater stability with less weight, a better crumple zone for accidents and structures that integrate accumulators directly into frames.

It will still be some time before welded metal chassis become obsolete. The production with SLS printers is still too expensive for series production and it takes too long. But additive manufacturing has already established itself in plastic parts. Due to falling prices, increasing production speed and new technologies, laser sinter printers could soon play a major role when it comes to new cars.