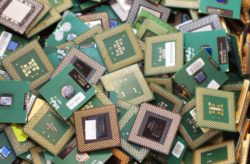 Year after year, more than 800,000 tonnes of electronic scrap are returned to the recycling cycle in Germany. Whether it is white goods, the old computer from the attic or the smartphone that refuses to do its job: All these devices contain printed circuit boards which are not only made of copper and tin but also of precious metals such as silver, gold and platinum. The recovery of metals from scrap instead of manufacturing them from primary raw materials does not only save money, but it also has a lower environmental impact.

Also scrap metal is partly worth a lot: The raw material price in some electronic components should not be underestimated. Old computer processors were to a large extent made of gold to provide better electrical conductivity and to protect against corrosion. Accordingly, the amounts that recycling companies pay for chips that are no longer used are high. Up to 120 euros per kilo are paid. However, not all products are by far as profitable as this. Circuit boards from newer electronics are often no longer gold-plated; new and smaller processors contain fewer precious metals. 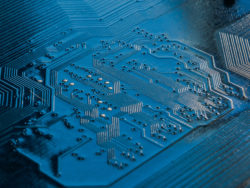 Nevertheless, the business is worth it on a larger scale: Every smartphone, which is no longer in use, contains about half a gramme of precious metals - no matter whether it is a high-end or a cheap mobile phone. One tonne of smartphones contains up to 250 grammes of gold. If this gold were extracted from ore, one would have to process about 60 tonnes of ore for the same amount. In addition, there are several kilos of copper, cobalt, silver and a few grammes of palladium. A tonne of old mobile phones can be recycled into materials worth 10,000 euros.

Collection: Millions of tonnes of e-waste per year

Without the reprocessing of electronic waste, immense quantities of valuable raw materials would be lost. As a result of rising demand and depleted mines, raw material prices would increase many times over in the near future. In aluminium recycling alone, 90 per cent of energy consumption can be saved compared to newly extracted aluminium. In addition, CO2 emissions can be reduced by a factor of 20. No wonder that around 50 per cent of the aluminium produced in Europe was simply remelted.

Within the scope of the German Electrical and Electronic Equipment Act (ElektroG), customers hand in their old washing machines, computers or mobile phones at electronics specialist shops or recycling collection points. This means that around 800,000 tonnes of e-waste are collected in Germany every year. However, this is by no means enough: The European Union demands a recycling rate of 65 per cent. The rate is calculated on the basis of the average value of electrical appliances sold within the last three years. In 2015, Germany reached only around 42.5 per cent of the defined target.

In terms of percentage, most of the electronic waste is generated in the form of household appliances, with consumer electronics taking second place. Computers, office equipment and communications technology account for a similarly large share. Industrial electronics only contribute to about 20 per cent of old appliances. 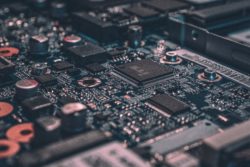 The collected electronic scrap is processed in a multi-stage recycling process chain. A melting furnace separates the no longer needed circuit boards made of glass fibre and plastic from metals that have a higher melting point. The metal cocktail now consists of aluminium, copper, gold, tin and many other materials. A TBRC melting aggregate further heats the slag in order to remove impurities.

Admittedly, the separation of metals from plastic and the subsequent processing requires a considerable amount of energy. Nonetheless, the process is much more environmentally friendly than the production of new metals from ores. Approximately one third of the annual gold production comes from newly melted scrap gold. The other two thirds go through a complex process: The ore must be mined, transported and then the rock must be separated from the pure gold. The separation is carried out either chemically on the basis of toxic mercury or cyanide lye. Alternatively, the ore is heated with borax, which also requires large amounts of energy. Recycling thus offers a comparatively gentle way of obtaining the precious metal required.

There are also no advantages in not recycling them properly: Electronic parts, which are no longer needed, end up illegally in Africa. Controlled processes give way here to uncontrolled burning of all delivered devices - including plastic housings and cables. Burning not only poisons the air but also the soil. Only about 60 per cent of the remaining metal is recycled properly.

Thus, there is actually no way around a "real" recycling: "Out of sight, out of mind" has long since stopped being a motto according to which business should be conducted. Instead, targeted reprocessing is financially feasible and in many places is implemented in an environmentally friendly manner. Targeted recycling of electronic scrap, which is stipulated by law, helps to set up an efficient cycle for all rare materials in order not to further pollute the environment.