This article is available in the following languages: 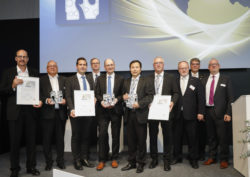 The NEWCAST Awards are a real highlight at the Bright World of Metals and have been awarded at every NEWCAST since 2003. In a celebratory ceremony Wolfram Diener, Managing Director of Messe Düsseldorf, awarded the trophies to Impro International Ltd (Hong-Kong), DGH Sand Casting Corporate GmbH & Co. KG (Friedrichshafen, Germany) and Feinguss Blank GmbH (Riedlingen, Germany). With the support of the jury of the Confederation of the German Foundry Industry, the winners were chosen in the run-up to the trade fair in the following three categories:

The substitution award went to a distribution device weighing just 5.43 kg from the Hong-Kong company Impro International, represented by Kailiang Chen (Managing Director  Impro Europe SARL & Impro Deutschland GmbH) and Volker Ritzel (Sales Manager Impro Deutschland GmbH). This was created using precision casting. Here, it must be noted that a part that previously had to be fully processed is now replaced by an economic cast part in stainless steel, thus making production sustainable and saving on resources.

The prize for the “Cast part with the best functional integration” was carried off by Johannes Zeiler (Head of Distribution and Marketing for DGH Sand Casting Corporate) and Dr. Jürgen Reusch (Innovation Manager) for their water-cooled electric motor housing. The housing weighs eight kilograms and is produced in an aluminium sand casting procedure. Its brilliance lies in sophisticated integration of various functions (such as water and oil cooling) in a housing that takes up as little space as possible.

Feinguss Blank from Riedlingen received the prize for the “Best lightweight construction solution”, for their wheel carrier which is truly a featherweight, tipping the scales at just 256 grams. It was produced at Feinguss using an investment casting process. A significant weight reduction of over 30% was elicited by using the latest simulation methods. Hubert Deutsch (CEO) and Lionel Genesi (Head of Industrial Sales) received the trophy from Wolfram Diener.

The prize-winning products will all be exhibited in the forum in Hall 13, Stand D 04 until the end of the GIFA, METEC, THERMPROCESS & NEWCAST.